Big transitions (and the fears that come with them)


We've been making big moves over here: new house, new school, new life, new beginnings. I decided that Quinn needed a school district with a track record of supporting students with special needs, so I bought a house in a neighborhood close to my own childhood home. I teach in the same district, at the high school down the street, so we're all close to home and close to each other. Despite these new comforts and conveniences, I was still apprehensive about how my kids would weather these changes. Atticus had established a close circle of friends at his previous school and Lucy was used to the small classes and personalized attention she received at The Rise School. And Quinn...well, I had dreaded this day since I learned about that pesky extra chromosome. This move was made in large part due to his needs, but had I done enough in other ways to prepare him for the academic, social, and emotional aspects of public school? Was he ready? Was I? As the time got closer, I realized that it was sink or swim. He was going to walk into that first day of school whether we were ready or not. So on our last day of summer vacation, I picked out their school clothes, packed their lunches, and then sat down to write the following:


For Quinn, on the night before your first day of Kindergarten,

I’m won’t lie, kid. I’ve fretted over this day from the moment I learned about your extra chromosome. I wondered if you’d understand the rules, if you’d be included by your peers, if you could find your way to the bathroom, if you could open your yogurt tube at lunch. And I still worry about those things. But today your family met with your new team of teachers, therapists, and administrators and felt excited about this journey for the first time, well, maybe ever. We saw clearly that they will support you and guide you and love you and teach you. They will see you for the light you bring and the gifts you possess. And a lot of that has to do with the teachers and therapists and administrators who laid that groundwork for your success at The Rise School of Houston. And a lot of it has to do with the fact that your awesome parents and grandparents moved mountains to get you zoned to a school that is known to support ALL its students. But most of it has to do with the fact that YOU, Quinn, are mighty. You are brave. You are capable. You are a reminder to all of us that anything worth having is worth working for, and that everyone deserves a shot at greatness. You will do great things. I know it. Own it.
Xoxo,
Mom


There was something cathartic about writing a letter that he wasn't going to read (at least for a while). I suppose I don't really want him to know the extent of my fears at this point. But I want him to know that I believe in him, so putting my tumultuous emotions on paper allowed me to project the kind of support I thought he needed most.

He walked in on that first day, waved goodbye to me at the classroom door, and made a bee-line for the alphabet puzzle in the corner of the room. He never looked back. And I was ok with it. It was the best I could hope for, honestly.

As the weeks progressed, I noticed that his long-standing love for school was beginning to wane. Our mornings featured more complaints and, eventually, tears. He had to be picked up out of the backseat at morning drop off and led to his classroom, looking over his teacher's shoulder to call my name as I pulled away to begin my own school day. It was heart-wrenching to leave him so sad, but it was nearly impossible for me to ask why. Because I knew the answer already...

One afternoon I did what I had to do and asked Quinn if he liked his new school. He didn't hesitate when he said "no", his little face crumpling, his eyes cast down to feign interest in his untied shoelaces. Then I asked the question I was dreading an answer to: "Have you made new friends?"

"No mama. No school. The friends are mean to me."

I held it together long enough to give him a giant hug and the best words of empty comfort I could muster. But I crumbled as soon as I left the room. I could hear Atticus howling his own sad tears from the kitchen, realizing he had heard everything. My sensitive little boy may have been more devastated about Quinn's loneliness than I was.

But my job isn't to cry. My job is to act. Kindergarteners are 5-year-olds; they're not intentionally being mean, they just don't understand. And Quinn can come on a little strong at times. I knew I needed to find a way to communicate his differences with the other families in his class, so I wrote yet another letter, this time to the Kindergarten students at his new school, asking the parents to read and discuss it at home. 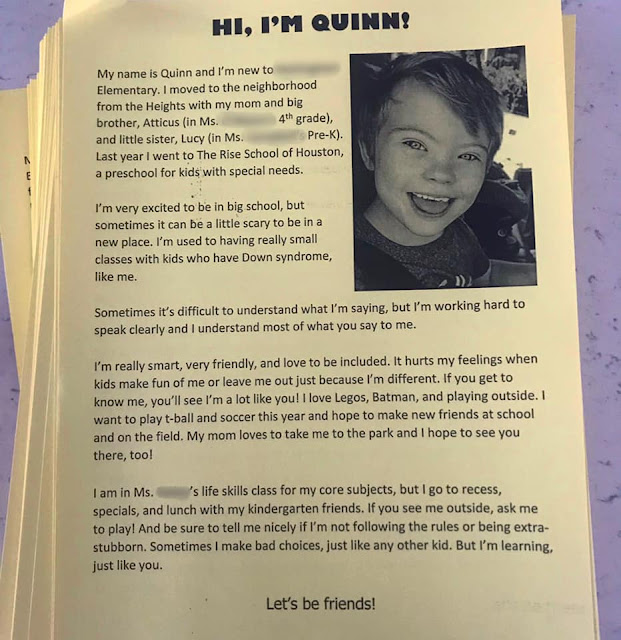 You guys. The response was amazing. I received so many texts and emails and messages letting me know that they discussed it with their kids. And then a few days later, many reached out to tell me that their kids went out of their way to play with Quinn at school and that they were excited to make a new friend. Turns out, a lot of these kids were having a tough social transition to kindergarten, too. Turns out, change is scary for everyone. But it’s a lot less scary with friends at your side.

Upon reflection of this series of new transitions, I recognized that a lot of the fears I had were my own. Fears about solo home ownership, fears about how Quinn would be perceived by his peers, fears about the school system. But my kids went into these transitions without much fear. They jumped in, implicitly trusting that I had made the right decisions for them. And my own hang ups only served to project my stress onto them, fears that were erased once I employed open communication and advocacy.

Once I looked past the fear, I realized that I made the right choice to move into this neighborhood and to send my kids to a new school. I'm thrilled to be a part of a community of families who look out for and support each other.

I'm happy to report that Quinn no longer cries when I drop him off in the morning, Atticus is loving 4th grade, and Lucy is making lots of new friends in PK. But what warms my heart the most is that they're all loving being in school together. Atticus and Lucy have recess at the same time, but on different, adjoining playgrounds. Once Atticus figured this out, he started to write her little notes with pictures of things she loves---unicorns, puppies, stick figure kids holding hands---passing them to her through the chain link fence that separates the big kid playground from hers each day. I've started to collect them so they don't get tossed. Someday I'll pull these notes out so they can see how much love they had between them from the beginning. Someday I'll share all these letters, pictures, and notes with my babies to show them that, while I worried about their happiness, I was more amazed by their resiliency. But today I'll take these victories and stop worrying. Today I'll just love them in this moment and show them I believe in them. I'll show them that I know they've got this.