What a Long, Strange Trip it's Been

December 26, 2012
Ok, so it's only been 9 days since Quinn was born, but given all we've experienced in that week and a half, it feels like a lifetime. Shortly after my last post about Quinn's birth, the nursery pediatrician came in to let us know that he would be moved to the NICU because he had failed to get his jaundice and breathing under control. Despite expecting a long NICU stay upon our little dude's arrival, we were still pretty devastated. They suspected an infection and wanted to get him on antibiotics as soon as possible as a proactive measure. Infections and illnesses in newborns are serious business, especially in preemies and infants with Down syndrome.

One of the most challenging aspects of his NICU stay was that I had been discharged even though Quinn wasn't allowed to go home. Brian and I decided to spend that first night by our little guy's side, trying to sleep on the painfully narrow bench (Brian slept on the floor) amidst the constant beeps and whirs of the machines in the room. Because Quinn was under the billi lights, the function of which was to break down the high billirubin that causes jaundice into smaller particles for his liver to process, he wasn't allowed to eat or be swaddled. Naturally, he wasn't too thrilled about this prospect after spending the last 8 months snuggled in the dark and quiet. So in addition to the machinery, we also were forced to endure his unhappy grunts and whines. Thankfully, our nurse Priscilla was amazing and took great care of all of us (looking back, I think we needed more from her than Quinn ever did). She was constantly reassuring and positive, patiently reminding us that, despite the wires and tubes sprouting from our dude's body, he was in good shape and would be on the mend soon.


When we got home after that long first night, Atticus was beyond ecstatic. During all this time, he had been staying at our house with his grandparents, who took turns trying to convince him that Mommy and Daddy didn't abandon him forever and would return soon. I don't think he believed them until we walked in the door; his relief was palpable. We spent the second night at home, knowing that a good night's sleep would be more helpful to Quinn than sleep-deprived parents, but we went often to visit and feed him. He hadn't mastered nursing yet and was having trouble sucking, swallowing, and breathing at the same time on either the bottle or breast. I was pumping as often as possible and stocking his little fridge in the NICU, but he wasn't taking to eating too well, so they warned us this could delay his homecoming. At this point, he had been off the billi lights and his breathing had regulated, likely because he was swaddled and comfortable, but he was receiving his meals through a feeding tube.

Finally, on day three, we were told we could take him home. His cultures showed no signs of infection and he was getting a little better at eating. They wanted to be sure that I felt comfortable encouraging him to eat on his own and reminded me that if he still wasn't eating at home, then he'd have to return to the hospital. I was confident that I could get him to eat and didn't want him to spend a second longer in the NICU. Not that they didn't take great care of him, but our son's place was with his parents. If anyone could get him to where he needed to be, we could. Despite our confidence, we got an earful from our least-favorite nurse, Kathy...

Kathy is one of those people who thinks she's really funny, but is actually putting her foot in her mouth every time she speaks. As we were strapping Quinn into his car seat, she said, "I want to share some info with you about your little guy. He's not the brightest bulb in the drawer. He's lazy and very floppy, even floppier than his buddies. Make sure you feed him with the lights on so you can see his color. He has a tendency to choke on his food."

What. the. hell. lady. You just told parents of a new baby with Down syndrome that he's "not the brightest bulb in the drawer"?! Are you mad? Or just heartless? Or perhaps you're the one with cognitive issues? We were stunned. Floored. How does one even respond to that? I wanted to shout and make a scene, but we wanted to bring Quinn home more, so we held our tongues. We know we'll face these attitudes throughout our son's life, but we didn't realize it would be so soon (or so obvious). We've spent the past week marveling at how well he is eating, how strong he's becoming, and how wrong Kathy was. We've decided that we will constantly strive to prove Kathy wrong...so far Quinn has been excellent at this.


Now that we're home, it's become a new kind of adventure. The holidays were a whirlwind, but I'm so glad our sisters got a chance to meet the newest addition; they were in town from the West coast for the holidays and hadn't expected Quinn to be here yet. Now that Christmas has passed, the realities of caring for a newborn and an extremely jealous two-year-old have set in. Today was my first day to wrangle them both on my own, as Brian had to return to work. Atticus manages to be wonderfully helpful one minute, bringing his brother a pacifier, blanket, or hat, then a complete terror the next. This morning he was so mad that I wouldn't suddenly stop feeding the baby to play with him that he spent a few minutes in blind rage, throwing matchbox Lamborghinis at me and screaming at the top of his lungs. It's going to be a long two weeks before school is back in session... 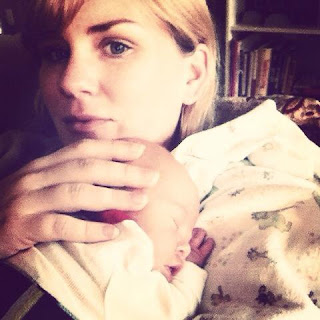