The Mighty Quinn: A Birth Story

December 19, 2012
If you're already a parent, you know your kids are the ones really calling the shots. On Monday afternoon, Quinn made that apparent with his early and unexpectedly quick arrival. Just when I thought I would be pregnant forever, I woke up at around 2am with a pretty intense, but short-lived contraction. I know that this tends to happen toward the end of pregnancy, so I ignored it and fell back asleep, but this continued for most of the evening. At around 5am, I decided to get up, take a shower, and start timing the duration and frequency of the contractions. They hurt, but there was absolutely no pattern to them at all. Most labor and delivery rooms have a strict policy that laboring women are not admitted until their contractions are 4-5 minutes apart and at least 60 seconds long. I was nowhere near there, so I decided to head into work. I needed to help my students prepare for their finals and, after laboring with Atticus for 19 hours before any real progress was made, I felt like I had time even if this was the real thing.

At work, I had a few more contractions, but they were irregular and infrequent, despite their intensity. My students would notice me pause and grimace occasionally, and a few made jokes that they weren't fully qualified to deliver a baby. I laughed it off and told them that it's not like the movies and labor doesn't happen that quickly. Nevertheless, I put in a call to my doctor. She told me what I was suspecting: it was likely prodromal, or false labor, but she wanted me to come in and be monitored to make sure that the baby and I weren't in any distress. I figured I'd be slapped with an order for bedrest and a prescription to assist with the pain. I called in for a sub, hopped in the car, and drove to the hospital to see my doctor, texting Brian along the way to let him know what was going on.

When I made it to the doctor's office, the contractions became pretty frequent and painful. My OBGYN wasn't in the office that day, but another doctor in the practice came in to check on me. The look she gave me was one I'll never forget: it was a mixture of shock, urgency, and a how-the-hell-did-you-not-realize-you-were-in-labor? I was almost fully dilated and the baby was coming. Soon. They ordered a wheelchair to send me downstairs to labor and delivery and told me to call my husband and order him to hurry or he would miss it. When we got downstairs, the delivery room was already packed with a whole team, including the delivery doctor. Within the hour, Brian made it, I pushed a few times, and Quinton Robert Emil Mennes was born at just 35 weeks, over a month early. 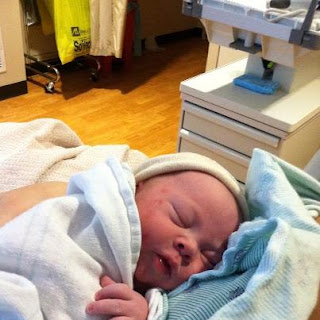 Weighing in at a healthy 6lbs. 13oz. and over 18 inches long, we spent most of the day in shock. How did this happen so quickly? How was he so healthy for being born so early, especially after such a terrifying pregnancy? How the hell did I manage to teach three classes that morning, drive myself to the hospital, and deliver a baby before lunch? We asked and attempted to answer these questions for hours, telling and retelling the story to anyone who would listen. It really was like the movies, and had I decided to stay and teach my 4th period (like I really wanted to), I probably would have delivered this baby in an ambulance or along the side of the road. Turns out our little dude was in a hurry to meet us.


Quinn has done remarkably well given the circumstances, They've run virtually every test on him since his birth and he's passed most with flying colors. He is currently receiving phototherapy for a touch of jaundice and is being monitored for irregular breathing patterns, both of which are common in preemies. We were supposed to be discharged today, but they want to keep him overnight to further monitor his breathing and give him a little more time under the phototherapy lights. Considering we were expecting a long NICU stay, we're seeing this as a good thing. He's been incredibly resilient thus far, so we know he'll continue to improve.

We are two proud parents and will continue to keep you all updated on "The Mighty Quinn." 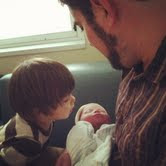