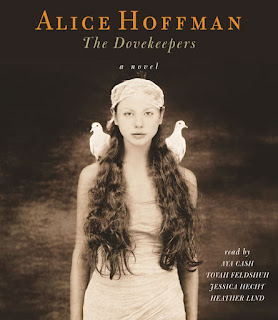 I'm a literary snob. I admit it. I'm an English teacher and book critic who turns her nose up at most fantasy, true crime, and so-called "beach reads." I watch television to zone out and be entertained, but I read to be inspired and informed. So when I came across Alice Hoffman's The Dovekeepers, my first instinct was to pass it by. It's not that Hoffman isn't a serious writer (she has currently published over 33 books, to date), but her style is one I typically avoid because it's almost too accessible. Her typical work is to literature as romantic comedies are to film; not bad, but not terribly cerebral either…until now.

The Dovekeepers, set in the Judean desert in 70 A.D., is centered around four extraordinary women from different walks of life, all of whom must endure the Romans' brutal attack on the Jewish community. In the hope of escaping further violence, many Jews found refuge at King Herod's fortress of Masada. The 960 men, women, and children in hiding resist the Romans for months before eventually committing suicide rather than face capture and enslavement, with the exception of two women and five children. The four protagonists are all greatly influenced by the anti-Semitism they face, especially by the misogynistic soldiers that they frequently encounter, creating a subtle feminist motif that isn't overpowering in its message. But in its simplicity of style lies a commanding story of love, loss, sacrifice, and redemption.

One such story of loss is with Revka, a widow who was forced to watch as her daughter was brutally murdered at the hands of Roman soldiers. Her two grandsons no longer speak after witnessing the death of their mother, and her son-in-law transforms from a gentle intellectual to a bitter and vengeful man. Revka's secrets at first keep her guarded from the other women who are given the task to care for the dovecotes, but she eventually befriends Yael, the pregnant daughter of an assassin, as well as Aziza and Shira, a mother and daughter duo with a rich history of mysticism and forbidden witchcraft. These women's eventual bond becomes one of the few things that holds them together in the end and provides them with the strength to face battle and the prospect of death.

Their stories, both past and present, guide the reader on a journey through a time not often memorialized due to the details lost from the distant past. As a result, Hoffman is left to fill in the holes that historical accounts left out. The problem, however, is that her writing becomes bogged down in the descriptions of the history she could find in her research, as if she's making up for the gaps in knowledge with too much substance elsewhere. Nevertheless, The Dovekeepers is a worthy read, even for the most discerning of tastes.