In honor of Down Syndrome Awareness Month, I've decided to share with you a series of guest entries by some of the amazing people we've met along our journey with Quinn. These posts are intended to help share the positivity that our kids bring us each and every day, while also eliminating some of the stereotypes attached to the chromosomally-enhanced. Each of our stories is as different as our individual children, yet the incredible joy they bring to our families is the same.

The first post is by my friend, Catie. Soon after receiving Quinn's diagnosis, we were given Catie's contact information. She was teaching music at Atticus's preschool and her daughter, Mara, was born with Down syndrome the previous year. It wasn't long before I learned that her job was a new one; just the year before she was an English teacher at Stratford High School, which is coincidentally MY job. When her husband passed the bar exam, she was able to take on part-time work and devote more of her schedule to her amazing kids, thus opening up a position in my current department. Whether I was hired to replace her position or not, we'll never know, as I was one of four new teachers in the English department last year. But I am certain that she and her family will be our lasting friends, as we have far more in common than the extra chromosome that Mara and Quinn possess, though that last commonality will connect us forever. She has been a priceless source of support and information, and meeting Mara for the first time instilled in me a new, positive outlook on what Down syndrome would be like for our family. 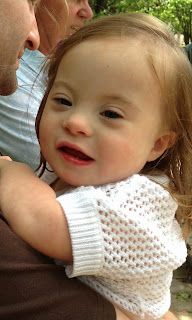 This is my Mara, affectionately known as Mara B (for Broussard, her middle name) or simply, the diva.  She's my second child and my only daughter.  She came screaming into the world on the afternoon of May 27, 2011, with a thick mop of black hair and surprise!  An extra chromosome--the 21st one.  Not exactly the Showcase Showdown, but I was assured it was the "Cadillac of chromosomal disorders," which I can assure you meant next to nothing to this gal, almost immediately post-partum.  There had been no indication during my pregnancy that she might have Down syndrome, so we were pretty shell-shocked.  My husband and I both had outdated ideas of what it meant to have Down syndrome, so a series of worst-case scenarios ran through our heads--everything from worrying about day care to kissing our carefree days of empty nesting retirement goodbye.  Instead of simply rejoicing over the birth of our much-awaited-for baby girl, we were thrown into a panic after being given a diagnosis and leaving the hospital with a list of imperative appointments with various specialists ranging from cardiologists to hematologists, geneticists, and ophthalmologists.  Those first heart-wrenching moments and
hours after the neonatologist spoke with us were followed by a sense of relief as our daughter was returned to us and we realized that she was a baby, not a diagnosis, something we had lost sight of while she had been away from us, getting checked out. We made it through those first shaky days and weeks thanks to the overwhelming support, love, and acceptance of our friends, family, co-workers, and the amazing doctors and nurses who were with us at the time.
We realized pretty quickly that people responded to it all based on how we presented it, so even though it was hard to do at times, we put on our best face and in doing so, were able to look down at this tiny, sleepy creature we cradled and realize she was our girl...and she just happened to have an extra chromosome.  We'd figure things out and they'd just fall into place as they were meant to be.  Sounds easy, right?  Well, all that being said, our emotions ran the gamut from anger to sadness to denial to acceptance, and back around and up and down again in a seemingly never-ending loop.  I'm just glad that my post-partum emotions were pretty tame, considering, and that I had a lot of cold Guinness in the fridge (What? It helps your milk come in!)  We were half afraid to love this child, in case one of the doomsday "maybes" were to come true, and half overwhelmed with a frantic, smothering love and need to protect this little peanut.  When I speak to other moms now, we all discuss those thoughts we're now ashamed of or embarrassed to admit to other people; but almost without exception, we all experienced them, and they are nothing but a natural and obvious part of the process of accepting a diagnosis either prenatally or postnatally,and mourning the loss of the child you thought you would have.

The weeks that followed involved those aforementioned doctor visits and a few surgeries.  Thankfully, Mara did not have any issues with her heart, but she was born with cataracts in both eyes that had to be removed a few weeks after birth.  She was also diagnosed about 18 months later with a duodenal web, which is basically a fancy way of saying girlfriend was not able to fully digest anything solid and was basically in constant pain due to her abdominal issues.  She had surgery to fix the blockage in December of 2012 and it changed her life.  She's now thriving and nothing short of a wonder.  I've met so many parents whose only words of advice have been to treat her like everyone else, and we've tried to do so.  She is now almost two and a half and is a true force of nature--making her way through the world by exploring everything and everyone she encounters in her own way.  We call her the diva because she knows her mind and when it is set on something, she'll do it, come hell or high water.  She is walking, talking, singing, feeding herself, using the potty, helping dress herself, cleaning herself, brushing her teeth, and shutting every.single.open.door she finds in the house (and subsequently cleaning it with a sock she puts on her right hand; always her right hand--kind of like a Michael Jackson/Amelia Bedelia hybrid).

To be honest, for awhile, I was not one of those people who saw Down syndrome as an amazing asset or blessing or whatever.  I loved Mara as much as I loved my older son but I didn't necessarily get the whole "there's something special" line that I heard time and again from other people.  That may have been because the first two years of Mara's life were extremely busy (and stressful) with various health issues that took a lot of time, effort, and frustration to resolve.  She was barely growing, physically and developmentally, and while I loved this beautiful girl to pieces, it was like having an infant instead of a toddler, and it was more than a little disheartening, even though I knew she would do everything in her own time.  However, bit by bit, as her health improved, her personality began to peek out, until it came barreling out in what I now know is typical Mara B fashion--large and in charge.  The Mara that we knew had been in there all along began to assert herself and has not ceased since and yes, I am now one of those parents who spouts out the old company line...but really, there is something special about her.  Yes, her smile does light up her whole face with a brightness that is heart-stopping.  Yes, she does make friends wherever she goes and brings out a gentler, softer side in people I didn't even know possessed one.  Strangers approach her and open up to us, creating instant bonds.  Yes, she stuns us with her intelligence and problem-solving abilities when we make the mistake of doubting her.  Yes, she keeps us roaring laughing with her shenanigans, such as flirting with men and mimicking everything her siblings do.  She is the light of our family--even when she is at her most frustrating or demanding, because when she works through those moments, she turns that inner light on you and you experience a moment with her that you simply don't have with other people.  She dances like it's her job, she laughs and thanks you for the slightest kindness (unless she's playing hard to get), and she reminds us on a daily basis that progress and happiness, not perfection, should be our focus.  Through her, we've met people who we've been lucky to share so much with.  We gather strength from these new family members (because, yeah, another party line...it is like a big, loving, instant family) and we support one another through good times and bad, having some awareness of what we're each going through.  Life will have its ups and downs but her diagnosis gifted us with the realization that there are no guarantees in life, so it is best to just take it as it comes and enjoy the little things that make you happy.  Fretting over the future or the unknown only takes away from the richness that can be found in the cacophony of daily life, with all its chaotic beauty.  Don't get me wrong--we fret.  We worry.  And then we step back and just try to let it go and enjoy what we've got in that moment.  And we're pretty down with any richness in life, including those people with the extra chromosome who do help make the world go 'round.

Thanks to Megan for so graciously asking me to share my story--hopefully it will speak to someone out there who needs to hear it.

To learn more about Mara and her brothers, be sure to visit Catie's blog!

Email ThisBlogThis!Share to TwitterShare to FacebookShare to Pinterest
Labels: Down syndrome, Parenting