For the Parent who Just Received a Down Syndrome Diagnosis, on the Anniversary of our Own

I don't know you, yet I feel that we are connected. I remember walking in your shoes and fearing for the future. I remember feeling so alone, then finding others who were experiencing the same emotions, and it helped me cope with the news that you are dealing with today. And so I write this letter in the hope that you find it. I write in the hope that you know you are not alone.

One year ago today, we received Quinn's Down syndrome diagnosis. I sat down in front of the computer and told the world our story in a post that makes me cringe when I read it now. In the year that's passed, I've had a chance to look back on those raw emotions and remind myself that I didn't know then what I know now. And most importantly, I hadn't met Quinn yet, whose very existence is my greatest accomplishment. He represents my courage in a time of doubt, patience in a time of chaos, and the unyielding strength of a tiny human that I took for granted.

But I didn't know this then. I was terrified, isolated, and grief-stricken. I found myself unable to celebrate this impending life, both out of fear and anger. I closed the nursery door and hid the baby clothes for months, embarrassed at myself in the process, but knowing that their very presence would send me into a tailspin of grief. I knew that I would love Quinn when he arrived, but this seemed so very far away from reality in the weeks following his diagnosis, and as time marched on, we faced new problems that made me fear becoming attached to someone who might not survive. I was an actor in those days, playing a role I remembered well from the time I was pregnant with Atticus. I knew how to answer the questions everyone loves to ask a pregnant woman: "It's a boy. He's due in January. He's my second." But those answers always felt like they deserved an asterisk at the end: "He has Down syndrome. The doctors found a pleural effusion. He might not make it." Of course, I never shared these footnotes. I gave the people what they wanted because no one knows how to reply to unexpected news like that. I joked and traded stories with other pregnant women while holding back a searing jealously because their baby would be "normal" and mine wouldn't; these women never had worst-case scenario conversations with their OBGYNs. While I was researching Early Childhood Intervention, Medicaid Waivers, and special needs preschools, these happy pregnant women were buying baby clothes and painting the nursery with stars in their eyes. I woke up at 3am almost every night, unable to fall back asleep because I was convinced I didn't have the skills to raise a child with special needs. In those months before Quinn was born, I was lost. 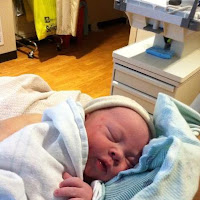 But then he arrived and my reality shifted. I held him in my arms after our very short delivery and could actually feel the pieces of my life falling into place, like a puzzle that, when taken apart and rearranged, was actually more beautiful than when it was previously assembled. Every worry faded away. The moment our eyes met for the first time, he seemed to ask that I take him for who he was, and what could I do but make that promise? There was no anger or sadness or jealousy, even as I looked at all the other newborns in the hospital nursery. My Quinn was perfect just the way he was.

And so I say to you, fellow warrior, give it time. You must allow yourself to grieve for the child you thought you would have. You must allow yourself to feel angry and jealous, for you never asked to take this journey. You never asked for your child to be "special." But there will come a day when your grief will break the surface and you will finally be able to breathe. And in that moment, you will realize that your life has taken on a new meaning. Everyone who surrounds your child will be made better because of him. And because you came out of this with a new outlook, you'll learn to worry less about the things that really don't matter. The spilled coffee, the morning traffic, the missed meetings will be frivolous. You have a higher mission than you did before, so these things can no longer touch you.

And as your child grows, their successes will bring you more joy than you thought possible. Every smile, clap, and coo will be a celebration. You will actually cry when he rolls over or learns to sit up for the first time, while simultaneously realizing that milestone charts are overrated. You will acquire grace and patience, and learn that your child blazes his own paths and develops at his own rate. And you will realize just how much better your life is now that he's in it. You will make friends who are walking similar paths and share an instant connection. I can't imagine my life without these people; it's as if we're all one family, and I root for their children with the same vigor and enthusiasm I show my own. Will there be hiccups? Sure. Will there be tough days? Of course. But we aren't guaranteed much in this life, and we have to hold on to happiness no matter what unexpected form it may take. For me, it's a supportive and loving husband, a precocious three-year-old who is honest and kind, and a baby with Down syndrome that smiles brighter than any person I've ever known.

Your happiness will come, too. I promise. And it will be impossible to ignore...